Coming out of last weekend, the network news guy told us how many HUNDREDS of THOUSANDS of homes were without power in the wake of a big snowstorm, which included a lot of area where people were not accustomed to dealing with such. It looks like a little more of the same this weekend. Here on the coast, we have to deal with hurricanes knocking out power every few years, on average, but we aren’t big on ice. In the north, you hear about it several times a year with the snow and ice and I wonder, “WHY DON’T MORE PEOPLE HAVE BACKUP POWER SYSTEMS???”

Sure, some people do have generators, but that is not always the best way to go, even the automatic whole-house generators. Don’t get me wrong, those are nice and Mom loves hers, but there are better options.

I have seen these headlines and repeatedly started to write this article, only to get frustrated about which way to go with it. There are so many options and maybe that makes the decision process more complicated. On this try, I will go with just a general outline and talk about some of the equipment. Hopefully, that will help you select the right system for your house.

First, do you want something that will take over normal operation of the entire house? Or would you be happy with something that will keep some lights on and maybe power the fridge and microwave so that you can have some comfort food and a hot cup of cocoa as the cold wind howls outside?

Let’s start with generator vs. battery. I visited a popular generator maker’s website and, by golly, they can solve all of your problems, they say. They tell you that a highly-touted lithium battery system will only last 2 hours and only put out a paltry 2kw, while they can power the whole house for days. Oh, marketing guys! This is the same generator Mom has. Twice it has failed to start because the service tech left the switch set wrong. Once it failed to start because the battery had exploded (which corroded a hole in the bottom of the cabinet). Every time it starts it burns a lot of expensive (in her town) natural gas and makes a lot of racket, regardless of load. Still Mom loves it, but I get aggravated when I have to drive 32 miles in bad weather or storm debris to get it running… 92 year old ladies don’t want to be troubled with mechanical issues, but they are good at sending their sons on a guilt trip. She bought her generator after a 2 week power outage and it usually works pretty well.

The marketing guys at the big battery company have a different story. They say their wall-mounted thing will make life grand for two weeks. Maybe so, if your idea of a grand life is operating a table lamp for a couple of weeks. Their battery system costs more than the generator, more even than a couple of homes I’ve owned.

Is there a compromise? Sure. First, you need to consider what a typical outage would be. Yeah, there are exceptions to “typical”, like the time mine was out for 5 weeks and the MONTHS that the folks in the Florida panhandle are looking at, but usually the number is just a day or two. My number was 4, because I live at the far end of a rural line.

Then, consider what you want to keep running. The fridge, microwave, Mr. Coffee, and some lights are probably on your list. In the north, maybe you need to run the blower and igniter circuits on an oil furnace. YOU CAN RUN THE WHOLE HOUSE, but it will cost more. Even a portable box you keep in the garage to provide a few lights can be a great comfort! Once you have decided HOW MUCH POWER you need by figure how much the devices use and how many hours you will use them, you can start looking at the components and number of batteries you need.

Let’s talk about inverters. These are gadgets that turn the DC voltage of a battery into the AC voltage that your fridge eats. They are commonly found with an input voltage of 12, 24 or 48volts. 12 volts is usually used on lower power systems and have the advantage that you can charge the batteries with your car, that 4000 pound generator in your driveway. 48v inverters are used on high power systems because the battery current is lower and you don’t have to use huge cables. 24 volt units are a good compromise and a good choice for a system for basic comforts.

The basic inverters just do one thing, they invert. Nothing automatic is going to happen. You connect it to the battery bank, turn it on and run a cord to whatever you want powered. You could plug it into a generator plug, if you have one installed in your house. From the basics, you then have all kinds of deluxe units. For an automatic system, you have inverter/chargers with automatic transfer switch (ATS). These would typically be installed between a main breaker and a sub-panel that feeds power to whatever you consider your critical or nice-to-have loads. The big ones can run the whole house. With these, on a normal day, the utility power passes straight through to the house and a little more goes to keep the batteries happy. When a squirrel leaps to his death on a power line transformer, your neighbors’ houses go dark and you notice a slight flicker in the lights as the inverter takes over. Maybe the ceiling fan has a slight buzz, but that’s it. Sweet.

And you know? Once that is in place and paid for, it is a simple matter to bolt a few solar panels to the roof to charge the batteries and power the loads. An outage that runs beyond the “typical” one won’t run the batteries down! That’s right, the backup system is the first step to a full-on solar power system. That is where my system is now as I gradually work toward total independence from the power company.

Since this is starting to run long, I’ll stop here and let this soak in, then move on to other considerations in a day or so. If you are not technically inclined, don’t worry. This is just to introduce you to some of the basics. After you know enough to ask the right questions and decide what it is you feel you want and need, you can call Sun Electronics. John’s crew has guys who can translate your needs into a package that will fit your budget. They design tailored systems all the time and it doesn’t cost extra. 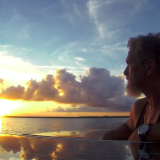