My lifelong friend Courtney, based in North Carolina, is gradually retiring from his job and having fun developing a line of solar equipment.  I think he is missing the point of retirement, but to each his own.  For one project, he bought a pickup load of panels from a nearby dealer and was surprised by a couple of things.

The panels he bought were of the noncrystalline variety, very common these days and usually what you get if you need the most watts in the least space.  He was working on a mobile system, so high energy density is a must.  This is what I am looking at on my Solar Yacht project.  The big surprise was that the dealer had tons of polycrystalline panels he could not sell because nobody wanted them.  Reason given?  Folks think that mono panels do better in cloudy conditions.

I asked John about that.  Sun Electronics has literal tons of panels in locations all over the country and every kind you can imagine.  As long as he has been in the solar business, he should know a thing or two about this, so I asked.  To a degree, the North Carolina guy is right, but sometimes this varies by the panel maker.  But if you really want the best partial sunlight performance, you go with thin film modules.

Thin film panels are much lower density, or bigger for the amount of watts they put out, BUT, they perform much better in low light and they are cheap  A while back I bought a pallet of  70 watt First Solar thin film panels from John.  I use them in two places around my farm and I think they cost around 7 cents per watt.  I think shipping cost more than the actual panels!  They work fine.

Monos? I bought a truckload of them for my solar yacht project.  As newer, denser panels have come out, I may not use them there.  Meanwhile, they are wired into my solar shed.

I have over 300 of the raunchiest looking old poly panels you ever saw, but they make a lot of power from good sun and were very cheap.

What about low light performance?  I never really tracked poly vs. mono, but I did run tests and convinced myself that the thin films hold up better.  Honestly, you get a cloudy day and you don’t get much power.  If this is an issue, then there are two ways to deal with it.  You can add more panels or buy a bigger battery in an off grid system.  For a grid-tie system, you just don’t shave as much off your power bills on those days.

So which panel do you need?  If energy density is an issue, like on my boat or Courtney’s trailers, go with mono.  Better yet, if the back side gets any exposure, go with mono bifacial panels.  Now, I am convinced that the ordinary old poly panels on my launch Sun King put out more than label rating in the summer when reflections off the water are hitting the back sheets.  Mono and bifacial are your choice for most power in the least space.  Expect to pay a little more for the boost.

I am planning to put in a new east-facing array when I can get the land cleared and will put in a north facing array when I expand the Solar Shed.  These will more than likely be poly.  The last 10 panel array I installed was a bunch of inexpensive polys.  Space is not an issue and when the time is right and I see a super deal, I will go down to Sun’s Miami warehouse and get a load. 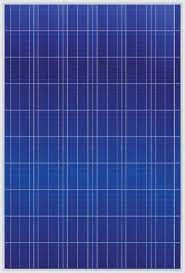 Poly panels are usually blue and with a close look you can see the crystals.

Thin films?  The ones I have work great.  Because most of the ones available do not have an aluminum frame, they can be a little tricky to mount unless you are on a regular racking system.  Price, when you can find them, is usually pretty cheap.

My advice?  If space is not critical, go for whatever panels John has at the best price.  Better yet, see if he has any in a warehouse in your area to reduce shipping cost.  If you can save some on trucking or even go fetch them yourself you will find yourself with an even better deal.  Again, John has tons of panels, thousands of panels.  Get yourself a deal.

Oh, and that bit about mono panels having better output in low light?  If the deal is right, just buy more of the other panels!