Sometimes things just don’t go right. Sometimes it is an easy fix. Sometimes it requires test equipment. Usually a simple multimeter will do, but not this time.

My main inverter bank has developed a problem.  Maybe it has been there as long as I have had it and it just hasn’t shown itself.  It happens at about 27 degrees and, this being Florida, we don’t get many dips that low.  This showed up in our big freeze a couple of weeks ago and I figured it would happen again with the forecast of 26 degrees this morning.  I avoided the problem by shutting it off and going to my old homebrew inverter. 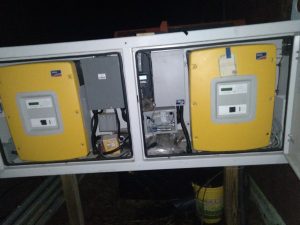 The yellow inverter on the left is cold natured.

I don’t want to work either in freezing temperatures.

A friend in cooler North Carolina has the same  main inverter setup and the same problem when cold.  I went to a forum to which we belong and nobody ever heard of such a thing.  Big help, those guys.  These are complex and sophisticated beasts with all sorts of internal diagnostics.  I will get into that later and see what I can find.

The main inverter is a pair of Sunny Islands, 6kw each, from 48v.  Each makes half of the 240 the house uses.  Lose one and a lot of stuff won’t work.  Like the heat or a/c.  In this case, before it just quits altogether, it behaves rather badly, slamming off and on, making some nasty spikes in voltage.  These events wiped out my motion detector lights, but nothing else.  If it had taken out the big TV and the sound system, there’d be war.

It is the homebrew inverter that I need to troubleshoot.  I got greedy, this morning, and switched from the wood furnace to the heat pump before the wife was done with breakfast.  She turns on everything at once and while ANYTHING is okay, EVERYTHING is not, at least when the heat pump is running and the smaller inverter is in use.  And the heater is on out in the Man Cave.  The lights went out.  I should’ve just thrown another log in the firebox.

Knowing that the Sunny doesn’t like the cold and knowing that this morning was going to be cold, I shut down the one inverter and fired up the other.  The Sunny is outside in a cabinet and the homebrew is inside where its heat can help keep the plants warm without running the heater so much.  A while back I had to replace the power module with a new one and the new ones never come in calibrated.  They are usually set pretty low.  I go through a routine of plugging in heaters and coffee pots and whatever else I can think of to use power, but they all have thermostats and begin cycling on and off after a few minutes.  I used to have an old electric range to use, but it is no longer available and it cycled, too, even on high.  What I need is a Dummy Load. 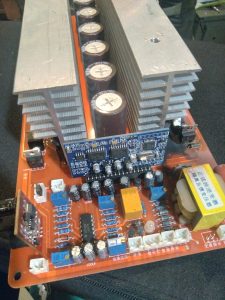 The tiny screws on the wee blue boxes–potentiometers– adjust the voltage, max power, overload, etc. on the power module

The dummy load is something of which I learned as a young broadcast engineer.  Rather than test a transmitter over the air, you put it into a dummy load to soak up the power while you make the adjustments.  Ham radio operators may remember the Heathkit Cantenna(TM).  It was a paint bucket full of mineral oil and a 50 ohm resistor.  Usually you could get your adjustments made before the oil expanded enough to start oozing out.  That’s what I need to tune my inverter…a Cantenna!  A BIG ONE!

Disclaimer, if you go solar, you probably won’t need to test at this level.  Mainstream gear probably won’t ever need adjustment, though there is some Chinese gear that is prone to having inflated power ratings.  I could name names…  The main point is to let you know it is ok to think outside the box.

I have had a little scheme in the back of my mind for a while and it turns out it could be combined with my dummy load.  Two birds with one rock.  Since I went to a wood-fired boiler for my hot water, my electric water heater has been in a shed out back.  It’ll hold 300 pounds of water and it has two 4500 watt heating elements.  If I add variable power controls I’ll have a giant cantenna!  A hair blower can add the extra kilowatt I need to tweak out the inverter to 10kw.  That’s one bird.

The other one?  During the course of a sunny day, the batteries get topped up by noon and power just gets wasted.  What if I could store some of that power that is otherwise lost?  Remember, power can be stored in many ways, not just in a battery.  Many of the other ways are LOTS cheaper and longer lasting than batteries, too!  Heat is useful and it is easy to store.  Heat is something I need in the solar shed on mornings like this. 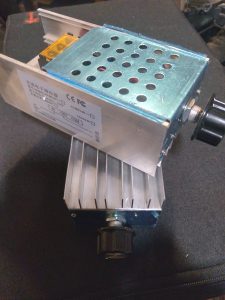 There are some really neat electronic gadgets available on Ebay.  I found a couple of variable power controllers, like industrial strength lamp dimmers, rated for 6000 watts and 240 volts, just right for the two heating elements on the water tank.  I think the pair of them were under 30 bucks.  I should have the wire I need.  The hard part will be getting the tank out of the shed.  It has been there long enough that it might not want to leave.  So you see, put a big breaker in the power box and run a line to the water heater via the two variable power controllers.  Oh, yeah, put some water in it.  Then all I have to do is watch the meters as I gradually  twist he screw to crank the power to 10,000 watts.  Simple and precise.

Now about the heating idea.   300 pounds of water raised 100 degrees F above ambient will give you 30,000 BTUs of stored heat.  That’s about enough to heat your house for an hour on a really cold morning and maybe my Man Cave all night.  If the tank were stripped of insulation and place in an insulated box full of sand, then the BTUs really start to add up.

Many better charge controllers have an auxiliary function relay.  It won’t handle a lot of power, but it is plenty to drive a contactor that will drive a big load.  On two of the inverters I have you can set the relay to trip at a predetermined setting, so when the batteries top up, we can keep getting power from the panels instead of wasting it.  Sending a/c power to the elements will use the power, but also use up some inverter capacity, unless you have a second inverter.  You could also tap battery voltage.  48vdc will not give you a lot of heat, but maybe enough, maybe not.  That’s something I will experiment with.  Another method might be to divert the higher DC string voltage from the input of a charge controller to the heating element.  Just bear in mind that DC power switching is prone to arcing, so you need slightly different tactics for doing so.  There’s probably an Ebay gadget for that.

Getting the heat out of the tank and into the room can be done by pumping or by normal convective flow in a thermosiphon.  All sorts of heat exchanger options are available, hydronic baseboard radiators being probably the easiest, though not commonly available in Florida.  That’s what mail order is for.

So there’s the plan.  Now to see if I can get the water heater out of the shed without breaking something.  But first, it is up to 49 outside.  I need to go see if the Sunny Islands will start back up…and start thinking about how to deal with that issue.  It may be as simple as tossing a horse blanket over the cabinet.