Go Big or Learn to Make Do

Solar isn’t just for hippies anymore. You won’t see many 12v systems, powering just a few bulbs and a radio salvaged from a car. Nope, solar is powering the American Dream home. 3BR, 2 Bath and every electrical device you can imagine. Trying to run everything at once is where you can run into trouble.

Tom powered his home, shop and hangar with a 10 kw inverter.  It did well.  He and Jane had to THINK sometimes about what all was going on.  It could power everything, but not at once.  When lightning got the inverter, he replaced it with an 8kw unit.  Nope, not enough.  Fortunately, most of the better inverters will stack and adding the second, adding up to 16kw was great.  No worries.

My system has evolved.  A 2500 watt inverter/charger was fantastic as a backup for lights, fridge, microwave and Mr. Coffee.  I ran it for years.  If I had had solar, it could have replaced that much of my power bill.

Then came a bit of solar and I did what I said.  The basic circuits were already separated, so it was a snap to replace the old inverter with the new, complicated slightly by the fact that the new inverter was over 200 feet away in the Solar Shed..  I had repaired Tom’s old 10kw inverter and since I had 10kw to work with, I put the air conditioner compressors on the load.  Everything except the stove and the laundry room and some outlets was on solar.  You know the next goal was to go whole house, but there were matters of battery and cable size.  The thought of getting any more cable in the ground without hitting the existing pipes and wires is scary, but eventually I was able to repurpose about 75 amps worth of copper that was already buried.

The white box is a soft starter inside the control area of one of my ancient a/c compressors.

Then the inverter blew again.  I reworked with different electronics and enhanced lightning protection, but the electronics were only good for 5kw.  I didn’t care to spend a lot on a new inverter when I could get the electronics for a hundred bucks.  Now I had more load than inverter.  Addition of a soft starter module in each a/c compressor allowed them to start on less surge current.  I also added a simple relay so that only one compressor would run at a time.  It worked! Eventually I located a module that would allow me to up the inverter to run 10kw.  I left the soft starters and lockouts in place.  I now had enough power for the whole house, if done in moderation.  The house is 2 story, 2000 sq ft, all electric, except no water heater.  Water comes from a wood furnace. 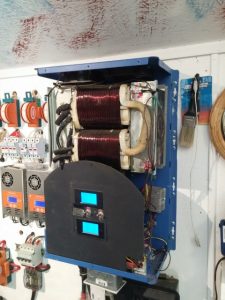 Tom’s old inverter gets another upgrade.

The battery pile had grown and I could spend more time off grid.  Cloudy, rainy days would put the stove and laundry back on the grid.  I found some gear cheap at an auction that I integrated into what I had and it is a very nice system.  It could be better with some more cable in the ground, but I like it.  Another 1500 amp hours of battery and a 12kw inverter stack.  Cloudy days are still an issue if you get a lot of them.  I may need 100 kwh from the grid in a month at times.  I have further upgrades in the works.  The ultimate goal is to make it so my wife doesn’t have to ask if she can use the dryer or do dishes or charge her buggy.  Make it totally transparent to any user without any special consideration.  Almost there!  And on a budget! (Bear in mind that I haven’t had a job in 16 years, and don’t want one, so I do have to watch the budget.)

Now take Mike, our last example, he got in on the same auction deal I did, so we have identical inverter setups and pretty close to the same battery.  His house is 2 story (plus basement office), all electric, though newer and probably better insulated, as he is more to the north end of the country.  He has gradually been bringing the system up and a couple of times the inverters have shut down, probably from an overload trip.  He asked for suggestions. 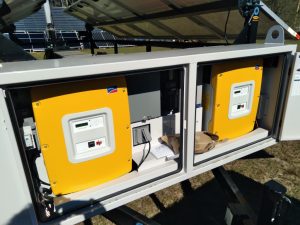 Mike and I both run a pair of these Sunny Island inverters for 12kw at 240v.  Not my first choice, but very good gear.

He could add more inverters,  which he already has, but I think he can do just fine with a few mods.  His wife cooks a lot, so there’s the stove.  Add in the dryer and 2 air conditioners and you are pushing the limit.  Do a load of dishes when the water heater is on and you are tripped.  He is best off if life can go on without special planning, SO, here goes.  While you want to use the heaviest load during the day, I’d say do the softstart and lockouts on the a/c units. That’ll knock 3kw off the peak, I suspect.  Use programmable thermostats on the a/c and heat to maximize use during the day to help the batteries.  I bet he already has a timer on the water heater.  Set it to heat up at a time when it is unlikely that any other big loads are running.  You know your lifestyle, so adjust accordingly.  If you do laundry mid day and dishes after supper, run the water heater in the morning.  Simple.

You’ll have big loads that have to coexist, but you can save a bunch on hardware by making just a few changes.  –Neal