I have been promising Part 2 for a long time. In fact, I meant to write this one before what ended up as Part 1. Life has been bizarre and hectic, here on the farm. So much so, that backup power has proved itself and I have questioned why I even have a connection to the power company!

Here is a recount of the latest disaster.  Last summer I got the power company to snug up my sagging power line.  Tree limbs, hurricanes, age and whatever had it sagging to the point I thought I might snag it with a tractor or something.  Power Guy snugged it up, perhaps a bit too much.  Then the weather turns cold and it shrinks, getting tighter.  A twang from a tree limb and the whole house would twang at about a G Flat.  It looked like the edge of the gable was out a little from the bricks, but I had other things to concern me, so I ignored it.  Then, another tree branch hit and there was no twang.  The line was slack again, because it had pulled the gable loose from the rest of the house.

That gable has been fine for decades.  In one hurricane two very large pine trees fell on the line and it held.  The combination of things finally got it and when I saw it I said…oh never mind, you get the idea.  I quickly got into the attic with some ratchet straps to secure things and called the power company to cut the line so I could pull on the wall  harder than their line was pulling.  For about a week, the line was coiled up over by the pole and I was busy reassembling the end of my house and removing the tree that had been dropping limbs.  The house was put back together with deck screws instead of nails and four steel cables run from that gable well into the house for a good grip.  This is something that might have freaked me out a little, but we went through such bizarre repairs on a friend’s Georgia farmhouse that this seemed almost trivial by comparison.

We went 6 and a half days without the power company and operated normally.  Good weather helped, but so did a backup power system with a good set of batteries.  Had the weather turned to where my solar system would not help with the charging, I can charge with gasoline, propane or diesel.

But I want to talk about my original backup system.  I quickly realized that if you are on a budget and someday want to have solar power, buying the solar modules is not the best place to start, especially back 30 years ago when panels were really expensive.  You start with the balance of system stuff: inverter, batteries, transfer switch, etc.

This was also appealing because while my house was under construction, a hurricane knocked out our power for 4 days.  So 4 days seemed to be a good goal for sizing the battery when I got to that part.

Below is a diagram, somewhat simplified, of how my house was wired to start.  Pretty much everybody does it this way, except usually room lights and outlets are on the same breaker.  My light circuits are lights only.  It really doesn’t matter which way you go when you think about it.  There are maybe 8 outlets in my bedroom, for example and only one is actually used for a lamp, a phone charger and the laptop charger.  Not a big deal.  There are plenty of other breakers in my big panel for lots of things to eat watts, but this is, as I said, simplified. 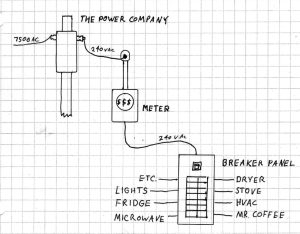 Initially I pulled just the lighting wires from their breakers, but eventually pulled the 120v kitchen circuits, as well, and put them on new breakers in a sub panel.  This is just a smaller version of the main breaker panel.  Something has to source power to the sub panel and that was a Trace PS-2524.  This was similar to the SW-2524, except it had a remote meter panel.  The Trace was mounted in my attic and the meter panel was in the laundry room with the main panel.

The attic?  Yeah, well, maybe that was not the best place.  It gets Florida hot up there, but not enough to exceed the specs on the rugged inverter.  There just wasn’t a good place to put it in the laundry room.

The Trace converts 24vdc to 120vac with a sine wave.  It is rated at 2500 watts and has lots of surge capacity.  It can invert, it can charge the batteries, it has an automatic transfer switch built in and it can even do grid tie reverse feed.  Every thing you needed when you got around to buying panels and racking.  Good gear, but they don’t make it anymore.  There’s newer, better, cheaper stuff, like the Schneider SW-4024 or 4048.  Also, some inverters will make 240 vac output for more versatility.  My Trace would chain to another to make 240vac, but that would be doubly expensive.

One of the newly-freed breakers in the main panel was replaced with a 40 amp breaker to run to the input of the Trace.  The output of the Trace fed the sub panel.  A bank of 8 golf car batteries, like the Sun 230 John sells, soaked up and released power as required.

This is what it looked like with the backup power system. 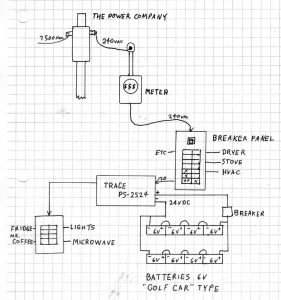 I forgot that there was also a line to power my computer, as that was important to how I made a living.   When I first had just the lights (and computer) on the system it would run 4 days without over-discharging the batteries.  I quickly felt the need to keep the fridge going as well as Mr. Coffee and the microwave.  You know, necessities of life.  That was first implemented with an extension cord down the stairs and reduced battery life to 2 days.  Pulling a few more wires out of the main box and connecting to the sub panel made it much neater.  When the battery started getting punky, I could run the big generator, but that was not needed.  Mostly.  Most outages were pretty short, but during one memorable storm aftermath, the lines were down more than a month.  I would wake up and fire up the diesel generator.  This would charge the batteries, warm up the water heater, cover all the big loads.  When I got ready to go to work I shut off the generator and life at home for the wife was pretty normal.  In the evening, upon returning home, I might (or not) fire up the generator again.  If needed, a load of laundry could be done.  My wife refused to use a clothesline!  Every time the generator ran it ran efficiently because it had a good load and it did not have to run continuously.  In 5 weeks, it only consumed 42 gallons of fuel!

So let’s go over some details, including things I would do differently.  If I had had the room, I would not have put the backup system in the attic.  The heat never bothered the inverter, but probably caused the batteries to use more water.

The batteries were put in industrial battery racks, 4 over 4.  This is a standard thing, but not the best way.  The best way was the way the old Delco Light systems worked, with the batteries on a stair step.  That made it much easier to check and water the batteries or clean and tighten terminals.  These are necessary chores and more likely to get done if done easily. 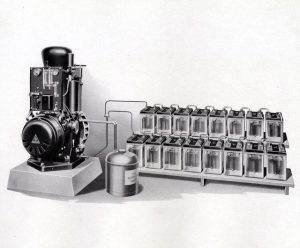 The batteries were in a corner, the wall sheathed in fire-resistant drywall.  A wooden box covered it.   The box was painted with latex paint to make it acid resistant.  The top was fitted with a small fan and dryer duct  hose to carry away the hydrogen gas.  The floor was covered with vinyl sheet material to be acid resistant and I usually left some baking soda sprinkled on the floor in case of spills.

The inverter itself, like most modern inverters, contained the transfer switch to immediately switch to backup power if the mains failed.  Nothing extra to buy.

So here we have a handy backup power system.  What happens when your budget is ready to include solar?  Stay tuned until next time.–Neal