John called the other day for some solar chit chat. He asked if I was still using my solar air conditioning and I replied that I was. It was holding up well in the blistering heat. He said, “You should write a blog about it.” Well, gee John, don’t you read this stuff?

There are 3 articles here in the tech blog, I think, about air conditioning with solar power, but maybe that isn’t obvious. The entire blog system got vaporized a while back and it has kind of come back in bits and pieces. Looks like webmaster Jorge has things finally under control. He has tweaked the graphics a bit though I see a few pictures that I need to replace. Hopefully, if you read through the whole lineup you’ll find some useful stuff.

To recap, my first solar a/c was a 5000 BTU window unit, powered by my solar boat. 5000 BTU will nicely cool a bedroom, but if you keep it going you’ll find that it can cool down the entire house a degree or two and really help with the humidity.  It is better than nothing!

When I got enough solar power to take a shot at running the central a/c, it almost worked, but my allegedly 8kw inverter on the 24v system couldn’t quite make the startup surge of either of my outdoor units. If it had started a compressor, it would not have been long before that inverter’s undersized transformer would have melted.

Somewhere in here I should point out that I have disconnected the big gray flex conduits that bring power from the disconnects on the wall to the a/c units and moved them to a different set of disconnects. The original disconnects are on grid power and the new ones have the solar power.

I figured the new 48v system with the big 12kw inverter would do the trick, because it worked for the previous owner. Alas, lightning got both the old 24v inverter and the new 48v inverter before I made the changeover. There was much sadness and a wee bit of despair over that.

So I found a source of electronic driver modules and built a new 5548, based on the transformer in the 12kw inverter. It would not make the surge power to start the compressor. I found a 10kw electronics module, but never got around to installing it, because I discovered a secret weapon for starting the a/c: the soft starter.

Soft starters, aka Smart Starter, are usually found in boats and motor coaches. The device alters the motor voltage and frequency to allow it to come up to speed slowly and stress-free. The boat or motor coach can avoid having an oversized generator just to start the a/c.  The variable speed compressors should be alright without this option. 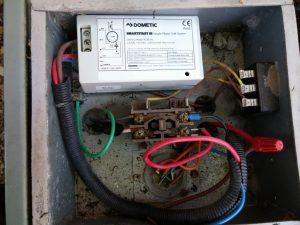 Well, that sounded like what I needed, but they were 600 bucks. I found two at a marine salvage dealer for $100 each and installed them in my two outdoor units. It worked! The 5500 watt inverter will start and run EITHER a/c system, but I did not want to take a chance on BOTH systems trying to run.

This required a lockout. This can be done in the house, if both thermostats are handy. That is not the case at my house, but the compressors are side by side. The downstairs unit was fitted with a relay that connects in parallel to the main contactor. When the compressor is running, the new relay clicks and the Normally Closed contacts open. The thermostat wire to the upstairs compressor goes through those contacts, so the upstairs unit can run any time it wants, except when the downstairs unit is running. The downstairs unit runs anytime it needs to run. Use a 24vac relay or a more common dc relay with a rectifier if you should ever need a lockout.

Ok, so the big job of getting the a/c to run was done. Getting the house cool during the day was not a problem, but most of the day’s 24 hours are not sunny and the a/c units are inconveniently, totally off grid.

I knew I didn’t have enough battery. Nobody ever has enough battery. But I did have batteries that were sitting around at night doing nothing. They were in the electric farm trucks. Yeah, another 350 amp-hours. Enough to run the a/c at night! So now, instead of being plugged into the 120v charger, they are connected directly to the 48v system via Anderson plugs. They are usually charged by the time I need them in the morning. 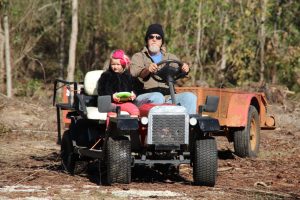 OK, I had the power, but no sense in damaging the batteries or shortening their life. Shallow cycles are better than deep cycles. Enter the programmable thermostats. 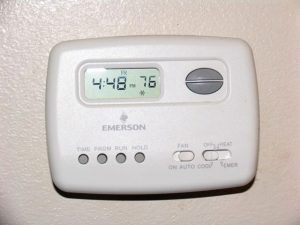 I had to work through some things to arrive at the final plan, but the basic idea was to get the house as cool as I could during the day, running the a/c as much as possible during the day, and running it as little as possible at night. If every day were sunny and bright then things would be much simpler, but this part of the alleged Sunshine State is often cloudy, especially in the late afternoon when it is hottest. Therefore, compromises were made.

When I was buying electricity, I would keep the thermostat downstairs at 78-80. Upstairs, unless the office was in use, was left at maybe 85. The final compromise that seems to work well is the downstairs thermostat is at a fixed 78 degrees, where it rarely turns on. The upstairs thermostat program is around 81 at night, jumps to 77 around breakfast and a little before 10am goes to 71.

On a really hot day it may only get down to 74, upstairs, but the rest of the cool is tumbling down the stairs. The 1.5 ton unit runs flat out with no cycling to cool the entire house. The only time the downstairs unit needs to run is when it is 100 outside and the wife is running the dryer, sucking in hot air, or I am using the oven.  Yeah, I bake.  If it is what we call a cool day (below 90) then the downstairs temp may go on down to the mid 70s.

I did have an alternating program on the thermostats to use the downstairs unit more, but there is a reason I am running the upstairs unit non-stop and I will eventually get to that.

Ideally, we’d chill the whole house during the day, but that takes BOTH a/c units and we just can’t do that at this time.

So far, the net result is that the house is cooler and more comfortable 24/7. We have a modest power bill while some of our neighbors are shelling out $400. Upstairs is super cool and that will be nice as we begin to dismantle my office up there and convert it back to a bedroom.

Now, for the reason we are running the upstairs unit so hard? You can get a hint by scrolling down to the “Micro-Inverter” post.

My friend Courtney had the idea of solar-powered a/c for folks who did not want to go through all the paperwork for a grid-tie system or the bigger expense of a large off-grid system.  How about something you just attach to the a/c unit and it uses solar power?  So, nice guy that I am, I volunteered my system as the guinea pig.  I figured it would work, but did and still have reservations about how cost effective it would be.

In a nutshell, a group of solar panels connects to a group of microinverters, the output power adding up to the amount used by the compressor.  No more than that.  This way you won’t actually grid tie and send power back to the company.  It all goes into the a/c.  You won’t need a soft starter, either, since you have all that grid power behind you.

The microinverter 240vac line connects to the compressor motor side of the a/c units contactor.  Good thing I buried some extra cable, huh?  This way, the microinverters are only activated when the compressor is running.  Annoyingly, they don’t start the power flow until the ac power has been on and stable for 5 minutes.  That is a big reason we want to keep the compressor running pretty much continuously.

The panels we are using are 300 watt LGs, which Sun Electronics has in inventory at this writing.  These work nicely with the Enphase 215 watt unit, which is a bit fussy about only using 60 cell modules.  Yes, at peak times we are just tossing 85 watts, but the rest of the time we have a more constant and predictable power contribution.

My test compressor, in addition to the Smart Start, has 3 recording watt-hour meters in it.  The top meter shows the microinverter contribution of 1949 watts at this moment (photo below).  The middle meter indicates that the compressor is consuming 2020 watts.  The bottom meter shows that the main power line is only having to kick in 75 watts!  As great as that sounds, when you consider nights and cloudy times, the microinverter setup is providing around 65% of all we are using.  There is definitely a savings there and it is definitely taking a load off my inverter during the day, as that is the “main power line” for the a/c.

Is it worth it?  Not to me, of course, since I already have a solar power system, but for you?  That will depend on what kinds of deals you can find on the components and what you have to do for installation.  This is prime guerilla solar stuff, and having to get HOA approval, an engineering study to mount panels on the roof and stuff like that would really take the fun out of it.  I don’t yet know what Courtney plans to do at the house he just bought, but in the meantime, the adventure continues.  In a couple of months, we’ll see how well the heat pump runs on solar.  I’m not a big fan of heat pumps on cold nights, but I don’t much enjoy cutting firewood for the outdoor wood furnace, either.–Neal